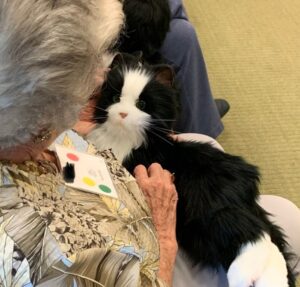 Individuals with dementia often experience behavioral and psychological symptoms such as depression, aggression and anxiety. Although these symptoms are generally treated with antipsychotics, antidepressants and benzodiazepines, those pharmaceuticals may have significant undesired “side effects.” Pet therapy is increasingly becoming known to be a cost effective and helpful therapeutic intervention for improving both moods and behavior in older adults.

Now it seems we have a drug-free, low cost, safe way to improve pet therapy: phony furry robotic creatures! Could these “pets” actually become a boon to the untold numbers of lonely, dementia-ridden, institutionalized and/or socially challenged elder folks? Apparently yes, we are now learning!

Employing cuddly and “furry” – that is soft – robotic cats, researchers from Florida Atlantic University’s Christine E. Lynn College of Nursing tested the effectiveness of affordable, interactive robotic pets to improve mood, behavior and cognition in older adults with mild to moderate dementia. Results showed that intervention with a robotic pet cat improved mood scores over time, with significant improvements in behavior as well. More than half of the participants scored higher in their moods after involvement with these cats as well as showing slight to moderate improvement in their attention, calculation and language skills. These pets also provided an alternate way for seniors with dementia to express themselves, which acted to relieve some of the stress and frustration these patients often experience.

Researchers also were interested to note the seniors were smiling and talking to their robotic cats. Some expressed feelings such as: “the cat is looking at me like someone who listens to me and loves me.” Participants in this study were fully informed that their pet was a robot and not a live animal. Each person was given the chance to select a name for their cat, which was then fitted with a collar and a personalized nametag. Several caregivers to these patients reported that their loved ones had slept with their pet, held onto the cat when sitting and/or consistently played with the cat. One participant even slept with her robotic pet cat for comfort when she needed to be hospitalized.

By using a robotic pet instead of a live one, there are far fewer concerns – for the safety of the pets as well as around feeding them, taking them outside, and making sure they are up-to-date with their vaccines. Other advantages of these robotic pets over real ones include the very limited cost as compared with pet health, the absence of safety fears due to possible pet aggression and pet allergies. And, of tremendous value to both aging folks and their loved ones, is that there is no death with a fake furry: this fact can, in and of itself play a critical role in the wellbeing of an older person since the robot completely avoids the depressive impact of losing a beloved pet to death.

With so few downsides, and so much upside potential, it seems this is a wonderful choice to consider. This “furry funster” could be seen as a cat caregiver that may not only benefit the senior but also may vastly improve the quality of life for their caregivers and family members.